The impact of the War on friends and neighbours in Merton is perfectly illustrated by the fortunes of the Milledge, Burge, and Griffiths families.  In the summer of 1914, 59 Lyveden Road was the home of my grandfather’s Uncle.  Samuel and Clara Burge had lived there since 1912 and across the railway line in Swain’s Lane during the previous decade. 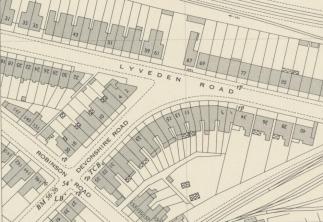 The Griffiths family moved in next door at 61 Lyveden Road in 1915, John and Rosina were originally from Camberwell, but for the last two years the family lived nearby at 50 Robinson Road.  John and Rosina Milledge had brought their family to 57 Lyveden Road around the same time.  Their roots were in Wimbledon, but they had lived in Stroud Green Road, Finsbury Park between 1910 and 1913.

Samuel Burge was a house painter by trade and the seven of his ten children still at home in 1914 were aged between nineteen and nine.  John Griffiths had made a steady living as a bookbinder and the four of his eight children living at Lyveden Road were now aged between 30 and 17.  John Frederick Milledge was another who worked in the building trade and his four children were aged between 19 and 9 at the outbreak of war.

Samuel and Clara Burge belonged to the “Plymouth Brethren” who met at Longley Road Gospel Hall.  Their strong beliefs may have set them apart from other residents of Lyveden Road and would certainly had been opposed to the conduct of the war.  When the Milledge family became their neighbours, Samuel Burge not only had a working life in common with John Frederick Milledge but Stroud Green Road, Finsbury Park was known as an area where the “Plymouth Brethren” had flourished.  The fact that the Milledge family had moved from Wimbledon right across London for those few years suggests the neighbours had more in common than just work. 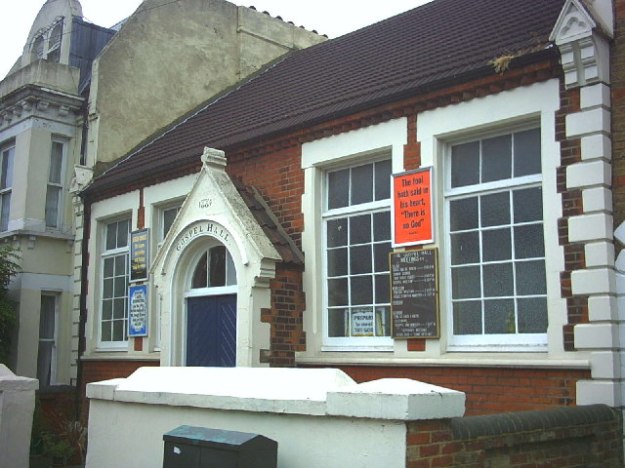 Many “Plymouth Brethren” would become conscientious objectors when compulsion was introduced in 1916.  But despite Samuel and Clara’s beliefs and their children’s upbringing, two of their sons, brothers Samuel and Reuben, rushed to volunteer in 1914 and a third, Charles Henry, would soon follow.  The Burge family were the first to suffer loss when Samuel “George” Burge was killed in Flanders on the 8th May 1915.

Frederick Ernest Milledge was the next to volunteer in mid 1915, and was sent to France by November 1915.  In the same month his brother Frank Leslie Milledge volunteered under the Derby Scheme on 15th November 1915.  He was placed on “Class W Reserve” and remained in the UK for some time. 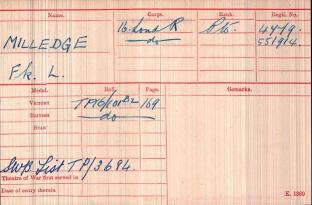 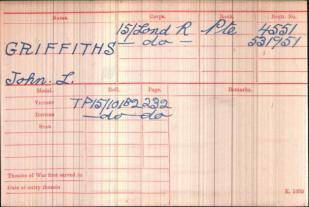 In the first week of November 1915, John Learwood Griffiths volunteered and was in France by 18 Arpil 1916.  When Ethelbert George Griffiths was conscripted on the 14th October 1916, his family had only just received the worrying news that his brother John was reported missing in action on 7th October 1916.  Within a month, his sister Elsie had contacted the Red Cross hoping John had been taken prisoner, but no further information was forthcoming.

As Christmas 1916 came and went, the New Year’s wish for the Griffiths family was that their son John was still alive, but for the Milledge family news came via the communication all families dread, their son Frederick Milledge, a corporal in the Royal Fusiliers, had been killed in France on the 17th January 1917.   His brother Frank, the only surviving son, was still in the UK, his fate yet to be decided.

Like his father, Ethelbert George Griffiths had worked as a bookbinder before his conscription on reaching his nineteenth birthday in October 1916.  He was posted to the 4th Reserve Battalion of the East Surrey Regiment after passing his medical at the Kingston Barracks.  Ethelbert is likely to have been in France completing his basic training at Etaples by January 1917 and would not join the 9th Bn. East Surrey Regt. until February or March 1917.  Six agonising months had passed since his brother John had been posted missing on the Somme, any vestige of hope for his survival was finally ended in April 1917 when he was officially declared to have died on, or since, the 7th October 1916, while serving with the “Civil Service Rifles”.

Ethelbert Griffiths may never have come across the other Mitcham men serving in his battalion of the East Surreys, a handful among hundreds.  But any one of his “pals” could have been among the long list of casualties meticulously recorded in the War Dairy when the trenches near the Zwarteleen and the Hill 60 crater were incessantly shelled between 23rd and 25th July.  It was a list that included Richard Wheeler’s name. 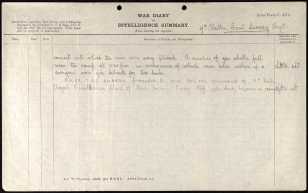 The men were physically and mentally battered as the Battalion left the trenches, crossed the Yser-Comines Canal and marched on past Voormezeele back to a tented camp near Dickebusch.  They would stay here until 1st August. 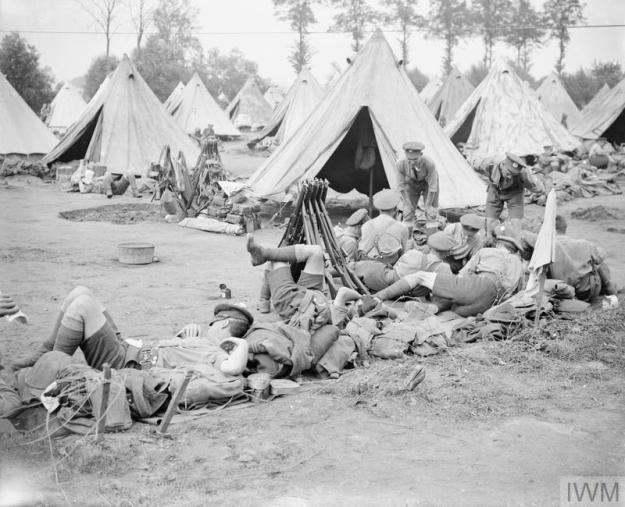 Junior officer, 2nd Lt. M.S Blower attempted to lighten the men’s mood with music by giving a gramophone concert on 28th July, “with which the men were very pleased”.   The Battalion were in reserve on zero hour 31st July, but by the following evening had been ordered back to the front line, back to Zwarteleen!

The Brigade Front now straddled the old German line of Jevhovah Trench and the final moves of the Battalion from Verbrandenmolen across the Yser-Menin Railway and through ruined Zwarteleen toward the front line would test every man.

The War Diary’s matter of fact account belies the terrible conditions and the dangers faced:

“Heavy rain had been falling for three days, no communication trench could be used – for they were more than waste deep in water and liquid mud.  Consequently all movement had to take place overland and the dark night and obstacles in the way made progress slow … on arrival at the support line, and further, on the way to the front line, C coy got caught in a heavy rain of shelling from the enemy, suffering something like 20 casualties in killed and wounded”

It was here that 2nd Lt R.C. Sherriff was wounded, he never returned to front. Fifty years later, his account of events on the 2nd August 1917 form a stark and disturbing image of the reality of war:

“The whole thing became a drawn out nightmare. The shelling had destroyed everything.  As far as you could see it was like an ocean of thick brown porridge. All of this area had been desperately fought over in the earlier Battles of Ypres. Many of the dead had been buried where they fell and the shells were unearthing and tossing up the decayed bodies. It was a warm, humid day and the stench was horrible. In the old German trench we came upon a long line of men, some lolling on the fire step, some sprawled on the ground, some standing upright, leaning against the trench wall. They were British soldiers – all dead or dying. Their medical officer had set up a first-aid station here, and these wounded men had crawled to the trench for his help. But the doctor and his orderlies had been killed by a shell that had wrecked his station, and the wounded could only sit or lie there and die. There was no conceivable hope of carrying them away”

An aerial photograph taken a few days later on August 7, 1917 at 5:00 p.m. shows the devastated landscape at Klein Zillebeke: 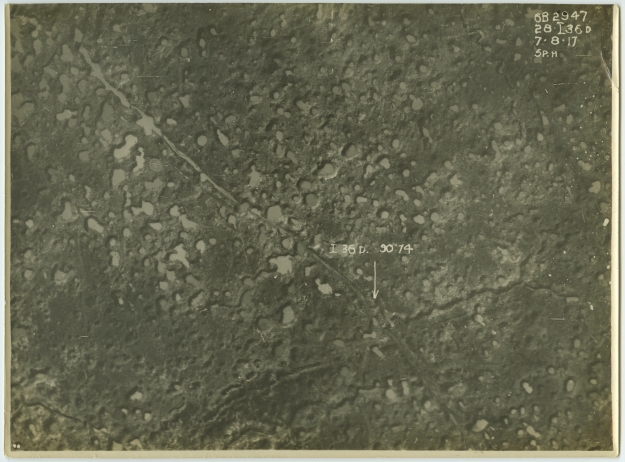 Once more the casualties in all ranks of the 9th East Surreys were carefully recorded in the battalion’s war diary in neat lines, as if on parade.  The name of 30040 PTE GRIFFITHS, E.G. appears alongside men from Fulham, Clapham, Coulsden and others killed that day.  Names that would eventually appear on the Menin Gate. 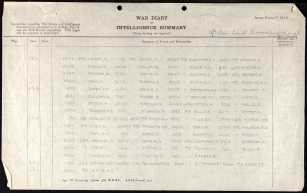 The Griffiths family at 61 Lyveden were left reeling from the loss of their remaining son.  Three years would pass before the Civic Memorial was erected on Lower Green when the residents of Mitcham gathered to honour their dead and remember the names carved in stone.  In the more private space of Christ Church, the names of brothers John and Ethlebert Griffiths appear together on the framed roll of honour.

Return Tomorrow to read the story of  the end of a journey for John Hopkins from Seaton Road, Mithcam

May 8, 1915 – Private Samuel George Burge, 2nd Bn. East Surrey Regiment, is killed in action near Frezenburg.  His body was never found and his name appears alongside thousands of others on the Memorial to the Missing at Ypres, the Menin Gate.

October 7, 1916 – Private John Learwood Griffiths, London Regiment (Prince of Wales’ Own Civil Service Rifles), is missing in action on the Somme and later presumed dead. His body was never found and his name appears alongside thousands of others on the Memorial to the Missing in Thiepval, France.

August 2, 1917 – Private Ethelbert George Griffiths, 9th Bn. East Surrey Regiment, is killed in action near Klein Zillebeke. His body was never found and his name appears alongside thousands of others on the Memorial to the Missing at Ypres, the Menin Gate.

Footnote 2:  Frank Leslie Milledge embarked for France on 11th October 1917.   Wounded late in March 1918, he spent time in Grove Military Hospital , Tooting and in the Special Surgical Hospital at Shepherd’s Bush.  After six month’s of hospital treatment Frank Lewis Milledge was finally discharged due to his wounds on 22nd December 1918 in time to spend Christmas with his family.